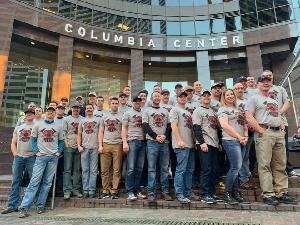 The Boise Fire Stairclimb Team is composed of over 40 members and countless supporters who all have a very personal reason for being a part of the team. Through the years we have raised over $500,000.00 and we will continue fundraising to support the mission and vision of the LLS and those whose lives have been shaped by this disease.

BFD Captain and longtime team member, Kyle Rajsich’s little sister was diagnosed with Hodgkin’s Lymphoma. Although he was already climbing for a personal challenge, that phone call from her is what caused the climb to take on a whole new purpose. His sister was invited to speak as the honored patient at the Stairclimb and courageously testifies to God’s grace and the successful treatment plan that led to her remission after two battles with this disease. He has seen the tragedy of blood cancers as it has affected so many lives, he has also witnessed great victories and similar stories of success due to the research and mission of the LLS.

BFD Senior Firefighter and LLS ambassador Rich “Boost” Brown started climbing in honor of his father in law and friend who were both survivors of blood cancer. Tragically it was during the preparation for the 2012 climb his dear friend Jason B Werst started his battle again and ended his fight on November 6, 2011. As horrible as this loss of a friend was, it was his catalyst to do better, to raise more money toward the hope others would not have to endure blood cancers. Boost himself has raised well over $100,000.00 individually and will continue until his body no longer allows.

Most recently our Firefighter brother, Paul Jones’ son, Max “Mighty Max” Jones, was diagnosed with blood cancer just before Christmas of 2016. Max, is the most courageous and positive young man. He is who we all want to be when we grow up; strong, positive, loving, encouraging and full of faith and this trooper will not stop fighting. He has countless Fire Service family members supporting him and so many who climb in his honor as his courage continues to shine.

The Boise Fire Stairclimb Team climbs for our sisters & brothers, our mothers & fathers, we climb for our friends & for strangers, we climb for our sons & daughters and we climb to bear in some small way the weight of that cross; climbing in faith and courage for those who are still fighting. We don’t have to look far to find motivation to continue to climb. Every 3 minutes someone in the U.S. is diagnosed with blood cancer, and every 9 minutes someone dies from a blood cancer. Please, help to

Boise Fire is honored to be climbing in the 2020 season. Please, click on the “donate now” button to assist us in reaching this years goal.

Special thanks and appreciation goes out to the contributions of the BFD L149 members for making our history so successful and our story so genuine and personal.

The LLS Firefighter Stairclimb is the world's largest on-air stair climb competition, and annual fundraiser held at the tallest building in town, the Columbia Center. All 2,000 participants are career, volunteer, or retired  firefighters who will climb up the second tallest skyscraper west of the Mississippi in full turnout gear, weighing over 60 pounds, while on-air. Throughout this grueling course, we all remember that every step forward is representative of moving closer to a cure. Although this is an extreme test of physical endurance, it pales in comparison to what blood cancer patients endure. All proceeds raised directly benefit The Leukemia & Lymphoma Society, and since its inception in 1991, this event has raised over $20 million thus far.

Thank you for your time, consideration, and sincere generosity. We climb because beating cancer is in our blood.