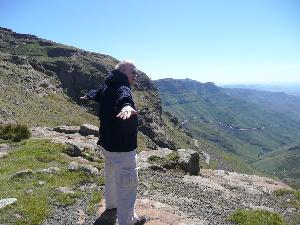 I am happy to report that I will again be participating in the 2022 LLS Firefighter Stair climb in support of The Leukemia & Lymphoma Society (LLS). I will also be continuing my tradition of dedicating my climb to a person and family directly impacted by this disease. This year is dedicated to Rob Nolan (pictured above) and his family.  Rob passed away earlier this year from CNL -Chronic Neutrophilic Leukemia.   Nancy, his wife was kind enough to share his story with me. What immediately struck me was her comment – “The Leukemia and Lymphoma Society was THE ONLY, layman source of information on CNL Rob even spoke to them on the phone. They were very caring and sent him lots of information.” The initial symptoms came up in his yearly exam in November of 2020. It was discovered his white blood cell count was extremely high. Additional testing led to a bone marrow biopsy in January of 2021. His diagnosis, Chronic Neutrophilic Leukemia, CNL. There have only been about 200 known cases in the world of this particular type of cancer. Because it is so rare there are no know causes, cures or treatments other than potentially a bone marrow transplant. The medium time of survival is anywhere from two months to two years but some people have lived longer. Rob passed within 6 months of the diagnosis. There was very little online written in layman's terms, other than the Leukemia and Lymphoma society. Rob only began to feel bad the last two months of his life when the inflammatory cells took over and his red blood cell count went down, making him weak. He was blessed to be able to die peacefully at home with the help of hospice, five days after his stroke. We were all with him when he passed.

In memory of Rob, a foreign service colleague for many years, I will be participating LLS Firefighter Stair climb, the world's largest on-air stair climb competition, and annual LLS fundraiser held at the tallest building in Seattle, the Columbia Center. All 2,000 participants are career, volunteer, or retired firefighters who will climb up the second tallest skyscraper west of the Mississippi in full turnout gear, weighing over 60 pounds, while on-air. Throughout this grueling course, we all remember that every step forward is representative of moving closer to a cure. Although this is an extreme test of physical endurance, it pales in comparison to what blood cancer patients endure. All proceeds raised directly benefit The Leukemia & Lymphoma Society, and since its inception in 1991, this event has raised over $20 million thus far. Thank you for your time, consideration, and sincere generosity in this cause worth climbing for.