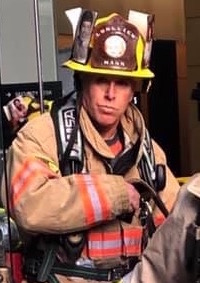 Where do I begin?   My quest to end Leukemia and Lymphoma started almost 40 years ago.  My childhood friends,Tony and Trish Martwick lost their cousin, Larry Martwick, to Leukemia.  This terrible disease hit closer to home when I lost my cousin, Steve Swearingen to Leukemia.  Having limited knowledge at the time, I always thought I'd get to see Steve when he was better.  I regret not getting down to him sooner before he passed.  My last visit for him was at his memorial where I spoke about a cousin who was a hero to his little cousins.  A man who always took time throughout his life to make sure his little cousins felt special.  I do miss him.

As I got older, I looked for a way that I could give in Steve's memory.  When I became a firefighter I found my avenue through the Leukemia & Lymphoma Society and their annual firefighter stairclimb.  It seems each year that I have someone new to climb for. I'm saddened by the frequency of this.  I started climbing for Steve and Larry but have since climbed in the memory of an incredibly sweet 4 year old girl names Addy Jo Clifton; who passed just months short of her 5th birthday.  Addy has since spurred me to become a bigger advocate. Looking at that beautiful child and knowing there was nothing I could do to help ran a dagger through my heart.  I have since put the people I climb for on my climbing turnouts.  In memory, I have climbed for Addy, Steve,Larry, Ken Bisbee and Phil Ireland.  I also have people who have survived because of the work of the Leukemia and Lymphoma Society.  These people include my mother, Beth Mann, MyronMartwick,  Lori Forrest, Debbie McEllrath, Anita Houghton and a special little girl who was recently cleared of Stage 4 Hodgekins Lymphoma, Kaylee Rankin.

What truly inspires anyone who knows me is the miracle known as Jim Piper.  6 years ago, Jim collapsed at work at his foundry in Wisconsin.  Jim was one of the best friends I had growing up.  His family is my family.  His little sister Jackie called me up to tell me that we needed to go there because he was dying. This was literally hours after finishing my 4th stair climb.  He had undergone chemo and radiation but organ damaged and potential organ failure made them stop.  He had developed Pneumonia and he was slated to die.  Jim was adopted so there was no close match in the family.  His parents got the courts to open his adoption papers and they found out that he had a full blooded sister who lived mere hours from them.  They called in the middle of the night, telling her she had a brother.  Her response?  "I always felt I did, what's wrong?"  They explained and she caught the next flight out.  The feeling was that it was a hopeless attempt but they gave Jim a bone marrow transplant from his sister who was a perfect match.  Jim had a white blood cell count of zero.  Needless to say, he survived and I had the pleasure of watching him marry last year.  Jim and his family could have never gotten that result without the Leukemia & Lymphoma Society. He owes his life to their ground breaking discoveries that all of you provide with your sponsoring of me.  This money does not go to overpaid CEO's or staff.  It goes to research. The Leukemia & Lymphoma Society is the world's largest VOLUNTARY health agency dedicated to blood cancer.  Last year 15 of the 18 FDA approved cancer drugs for blood cancer treatment were developed through support of LLS.  These treatments are now being used to fight ALL cancer.

So this year?  This year I climb in memory of Sarah Jamison.  As a 9 year old girl, she bravely fought Acute Lymphocytic Leukemia (ALL).  For 5 years she was in and out of the children’s hospital in southern California battling for her life.  Her childhood was one day at a time.  Chemo treatment after chemo treatment.  Finally doing her last bone marrow check at age 18.  After all she battled through as a child, she succumbed to cancer as an adult after fulfilling the lives of the children she had taught for so long at the Downey Unified School district.  Her impact to my dear friend Julie Rytand Martwick has been acute; a hole that can never be filled.  I am so sorry for your loss.

I would also like to dedicate this climb to another high school friend, Carolyn Verner-Dogan, who lost her mother right after high school. Only due to a recent reconnection was I aware of her tragic loss.  We can never truly replace mothers so young in our lives.  Shirley Verner is missed by many. Another high school family friend also let me know that her father Robert Perry Ivery also passed in 1979.  I've known these ladies since Jr. high and never knew.  Their parents left an indelible mark on their lives.  I can only hope to honor their memory in the best way I know how.

I would also like to recognize Mark Olson.  Mark passed from Leukemia way before his time.  A strong family man whose legacy will always be remembered by those who loved him.  So many people have reached out with fond memories of Mark.  I hope I can do his memory justice.

We also have two strong young men battling right now.  We climb for these two to give the the best chance possible.  Michael Flores was diagnosed with Osteosarcoma two years ago at the age of 10.  He has fought off two recurrences and has been recently diagnosed with a new tumor.  We are behind you 100% Michael.  You got this!!  You have an army behind you.  We also have Jacob Luckart, who at 20 is fighting ALL.  He recently received his stem cell transplant from his sister who was his donor.  I would also like to recognize a 7 year old fighter by the name of Malachi Cota who is bravely battling T Cell ALL.  You have a Army behind you Malachi!!  My prayers to you and your family.   I will keep you all up to date on their progress.  This is why we do this.  To protect people, especially our youth.  WE MAKE A DIFFERENCE

So what do I do besides ask for donations?

I climb. Starting Thanksgiving of every year, I dedicate all my training to the stairwells.  I train with a 60lb pack doing between 90 to 150 floors per session and speed work which can go from 200-300+ floors a session.  How often?  EVERY DAY. I’m not just asking for your donations. I am day after day EARNING your donations.  That’s 10,000-12,000 floors by competition time.  I figure it’s a small price to pay for the sacrifice of those whom you love.

The LLS Firefighter Stairclimb is the world's largest on-air stair climb competition, and annual fundraiser held at the tallest building in town, the Columbia Center. All 2,000 participants are career or volunteer firefighters who will climb up the second tallest skyscraper west of the Mississippi in full turnout gear, weighing over 50 pounds, while on-air. Throughout the 69 flights of stairs, 1,356 steps, and 788ft. of vertical elevation gain, we all remember that every step forward is representative of moving closer to a cure. Although this is an extreme test of physical endurance, it pales in comparison to what blood cancer patients endure. All proceeds raised directly benefit The Leukemia & Lymphoma Society, and since its inception in 1991, this event has raised over $17 million thus far.

Thank you for your time, consideration, and sincere generosity. We climb because beating cancer is in our blood.