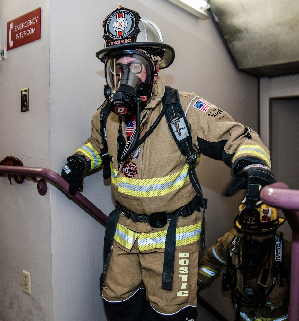 Hello!  My name is Jason Bostic, I am a firefighter with the Johnsville Fire Department and the Fredericktown Community Fire District in Central Ohio.  On March 8, 2020, I will be competing in the 29th annual LLS Firefighter Stairclimb  in support of The Leukemia & Lymphoma Society (LLS).  This is my 14th year competing and the sixth year as an Ambassador to the event.

Why do I compete and find it important to fundraise?  My mother was diagnosed with Chronic Myelogenous Leukemia (CML) in 1986 when I was eight and my sister was four.  She fought the toughest of battles in a time when treatments and cures were different.  Thankfully her "cure" came in the first unmatched/unrelated bone marrow transplant that was done at The Ohio State University in Columbus, Ohio.  I climb in honor of her battle, and climb in honor or memory of a long list of others so that hopefully someday we will have ALL of the cures and can rid the world of BLOOD CANCER!

Before I ascend the Columbia Center in downtown Seattle, WA, I will be raising funds throughout the season in the name of funding and finding a cure. Please consider making a donation to not only help me achieve my personal fundraising goal, but to benefit patients and their families everywhere.

The LLS Firefighter Stairclimb is the world's largest on-air stair climb competition, and annual fundraiser held at the tallest building in town, the Columbia Center. All 2,000 participants are career, volunteer, or retired firefighters who will climb up the second tallest skyscraper west of the Mississippi in full turnout gear, weighing over 60 pounds, while on-air. Throughout this grueling course, we all remember that every step forward is representative of moving closer to a cure. Although this is an extreme test of physical endurance, it pales in comparison to what blood cancer patients endure. All proceeds raised directly benefit The Leukemia & Lymphoma Society, and since its inception in 1991, this event has raised over $20 million thus far.

Thank you for your time, consideration, and sincere generosity in this cause worth climbing for.